Families are being hit by a cruel stealth tax that is forcing cremation and burial fees up to crippling levels, according to new research from Funeralbooker, the independent and impartial funeral comparison service.

Analysis of 2017 cremation and burial fees set by public and private crematoria and cemeteries shows[1] that fees are not only rising for the second year in a row, but inflation-busting average increases of 5.2% for cremation and 5% for burial are seeing them hit new highs.

As a result, families will find themselves forced to shell out an average £753 for a cremation, while burial fees will now cost a staggering £1,792 on average. The hikes to these unavoidable fees will put even more of a squeeze on the budgets of the bereaved, raising concerns over the potential impact on funeral poverty and household debt.

The findings also reveal significant regional variations in both the level of increases being pushed through and the resulting fees. This means that families are not only being hit by a stealth tax, but are at the mercy of a postcode lottery too.

This has led to differences of as much as 7,000% or £18,064 for burial[3] and 104% or £509 for cremation[2] depending on where you are based in the UK. Beckenham, Crawley, Leatherhead, Nuneaton, Moray, Dundee, Oxford, Northampton and Chichester are the joint most expensive places to be cremated in the UK, with families facing a whopping £999 fee. This is in sharp contrast to the £490 fee – the lowest cremation fee in the UK – facing residents of Feltham in Hounslow, London.

Regionally, the South West sees the highest average cremation fee in the UK at £809, followed by the East of England and the South East at £796 each. 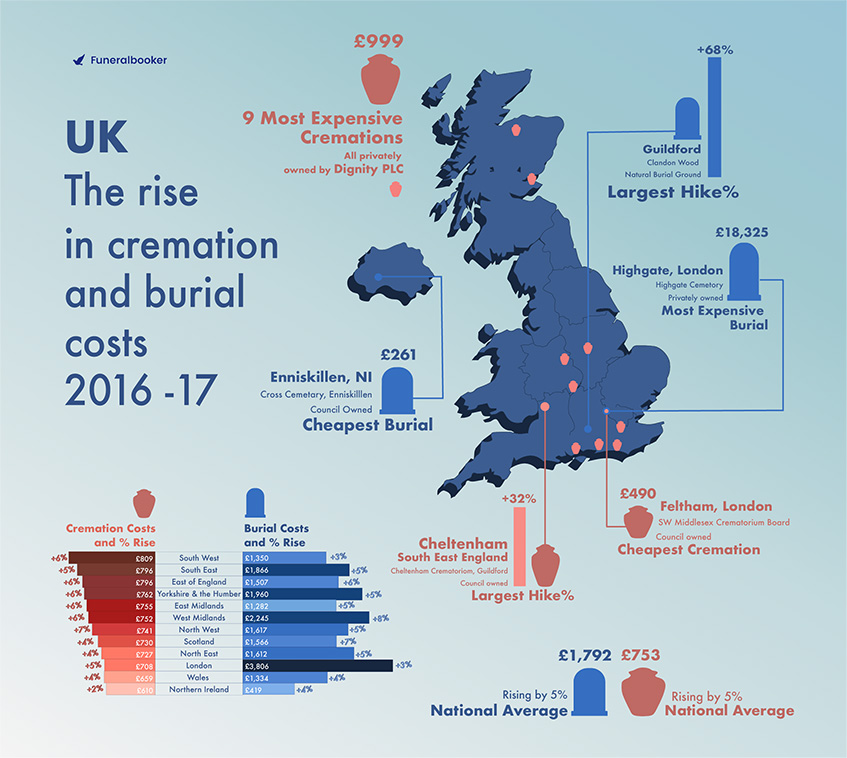 London takes the top slot for burial fees, with these averaging out at £3,806 – more than double the UK average. The capital is also home to the cemetery charging the single highest burial fee in the UK – Highgate Cemetery, which charges an eye-watering £18,325.

At the opposite end of the scale, Northern Ireland has seen some of the lowest price increases and remains the cheapest place to die. Cremation fees in Northern Ireland come in at just £610, while burial costs £419 – less than a quarter (23%) of the UK average fee of £1,792.

Around seven in ten people in the UK are cremated, with the relatively lower cost of cremation fees compared to burial costs undoubtedly helping to fuel this trend. The data shows, however, that 240 or 85% of the UK’s total of 282 crematoria are increasing their fees this year, with 221 hitting local families with inflation-busting price hikes.

But despite being responsible for the biggest percentage hikes, council-operated crematoria are still typically cheaper than privately-owned. In fact, the analysis shows that the ten most expensive crematoria in the UK are all owned and operated by Dignity PLC - with cremation fees close to breaking the £1,000 barrier.

James Dunn, co-founder of Funeralbooker, says: “These price hikes are the ultimate stealth tax, going completely unnoticed by families until their moment of need. But with such significant price differences now appearing across the UK, many will be questioning whether these fees genuinely reflect the service they are getting or are simply down to opportunistic greed.

“Cremation is the cheapest option, but affordability is of growing concern., And, with some privately-owned crematoria close to breaking the £1,000 barrier, the danger is that local councils will raise their fees to follow suit. If these costs continue to climb, families will struggle and we will see funerals causing even greater hardship and stress.

“Disbursements, or cremation and burial fees, are almost entirely unavoidable, but families can protect themselves by planning ahead. If meeting the cost of a funeral would be a struggle then it might be worth taking out a pre-paid funeral plan, which will guarantee to meet your funeral director’s fees and will help meet the costs of disbursements. It’s also worth remembering that independent funeral directors typically offer better value-for-money and a more personal service than the big chains, so it’s definitely worth going online to shop around.”

Families can use this free and simple calculator to find out how much a funeral in their area could cost:

Footnotes:
1. Analysis of prices across the UK’s entire stock of 282 publicly and privately owned crematoria and across 951 publicly and privately owned cemeteries that are still open for new burials. Data correct as at the end of April 2017.
2. Difference between lowest cremation fee of £490 in Feltham (Hounslow, London), and most expensive fee of £999 found in Beckenham, Crawley, Leatherhead, Nuneaton, Moray, Dundee, Oxford, Northampton and Chichester.
3. Difference between lowest burial fee of £261 in Fermanagh & Omagh District Council, Northern Ireland, and most expensive fee of £18,325 in Highgate Cemetery in London.